A guide to support Lit Circle study of the novel 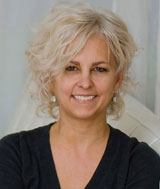 Her website also has a great overview of the novel

These fantastic Infographics were made by a teacher and his class: 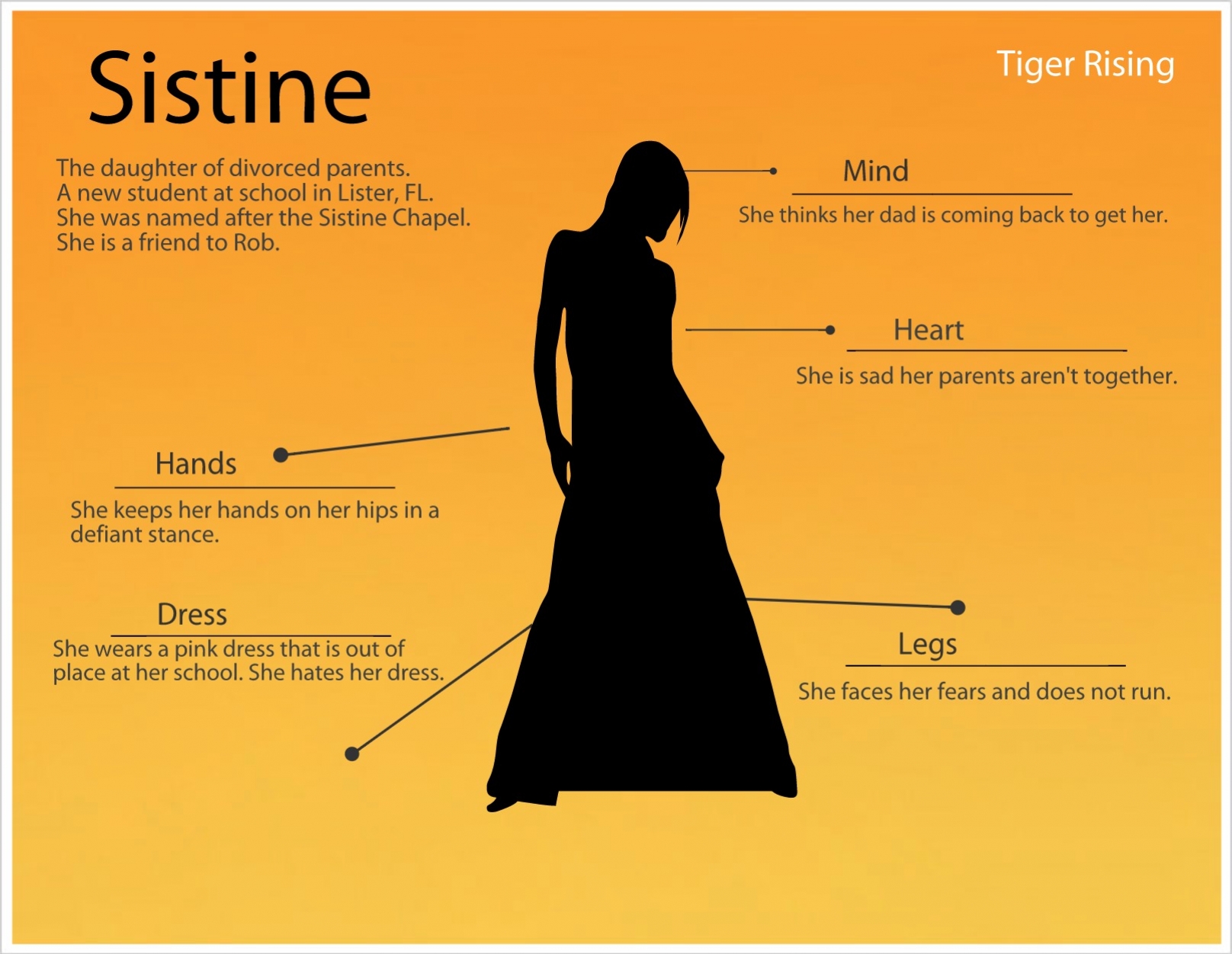 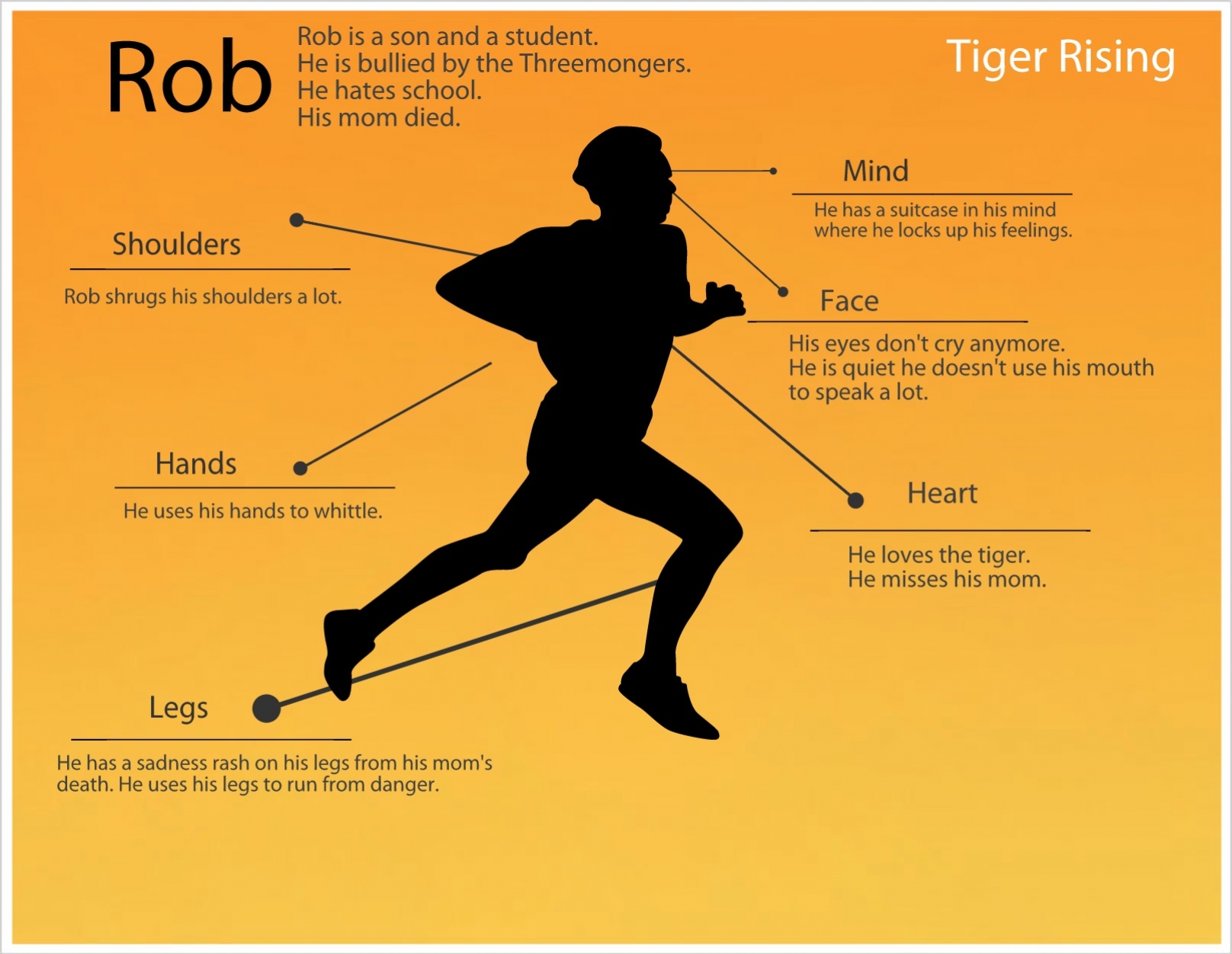 Vocabulary: you will need to learn the meaning of these words 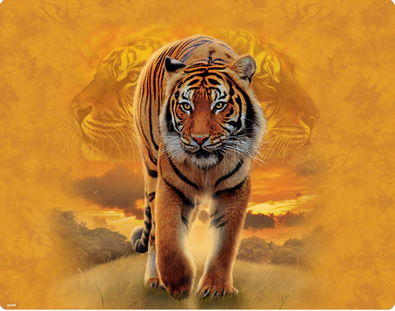 Rob Horton has recently moved with his father from Jacksonville to a dumpy motel in Lister, Florida. Ever since his mother's death, Rob has packed up his feelings in a "suitcase" and clamped it down tight. He is determined that nothing will make him cry again–not the bullies who torment him at his new school, not the ugly, itchy rash on his legs, and especially not missing his mother. Then two extraordinary things happen. First, Rob discovers a real-life caged tiger in the woods behind the motel where he lives. On that same day, he meets Sistine Bailey, a feisty, independent-minded girl who lets her feelings out as readily as Rob holds his in. As Rob and Sistine learn to trust each other, and eventually become friends, they prove that some things – like memories, and heartache, and tigers – can't be locked up forever.

Rob changes greatly from the beginning of the story to the end. Give three specific examples of those changes.

The change begins slowly as Rob becomes friends with Sistine. One of the first examples of how Rob's character is changing is when he changes his policy of not speaking (p. 23) when he first sits with Sistine on the bus. He changes his vow not to wish for things when he chases Sistine rather than believing that he really doesn't care about her friendship. (p..48) After Sistine leaves that day, he chants his mother's name, which is the beginning of his opening up and letting some of his grief come to the surface. (p. 60) When he confronts Sistine with the "truth" that her father isn't coming to get her, it represents another example of how his character is changing. (p. 96) Finally, Rob realizes that he knows things that he didn't even realize he knew. (p. 101) This is the culmination of his change in character as he is becoming more aware of his own thoughts and feelings.

When Rob first tells Sistine about the tiger, her answer is "Where?" Rob feels that he picked the right person to tell about the tiger. What do you think Sistine's answer reveals about her?

Sistine believes Rob right away and doesn't tease him. He wanted to tell someone who wouldn't doubt him (p. 38), and he found that person in Sistine. Sistine's answer reveals that she is different from the other students at school with whom Rob chooses not to speak. Like Rob, she needs a place to put her hopes and dreams.

Sistine is easier to talk to because she is an outsider, like he is. Later, Willie May points out what a good pair they are; Rob is full of sadness and Sistine is full of anger. (p. 81) They become friends because they can talk to each other and they have similar experiences: the loss of a parent, living in a new place and being unusual. Sistine makes Rob feel happy for the first time since his mother died. (p. 52)

A theme is a big idea or central topic of importance in a work.  It is often timeless and universal (like a concept), such as ‘love’ and ‘death’. Short stories often have just one theme, whereas novels usually have multiple themes. A theme of a story is woven all the way through the story, and the characters' actions, interactions, and motivations all reflect the story's theme.

Rob thinks things through by making a plan to control his thoughts and feelings. He pushes his thoughts deep inside of him like the suitcase he packed when he left Jacksonville. (p. 3) This affects his actions toward his father in that he doesn't talk to his father at all about his feelings. When the Threemonger brothers bully him on the bus, he follows his plan which is to show no feelings so they get bored and leave him alone. In school, he follows that same policy of not speaking. When the principal tells him that he will have to stay home until his rash clears, Rob does not argue or respond, except to say, "Yes, sir." (p. 15)

Why was the discovery of the caged tiger so extraordinary to Rob? How did its discovery help him at the beginning of the story? At the end of the story?

Rob considered himself lucky to have found the tiger. (p. 1) The thought was so exciting to him that it helped him "keep his suitcase closed." (p. 4) In the beginning of the story, talking to Sistine about the tiger strengthens their relationship. Throughout the story, the caged tiger represents the feelings and dreams that Rob has pushed deep down inside of him. By the end of the book, when Rob and Sistine release the tiger, Rob confronts his father with all the feelings he has bottled up inside. His father is finally ready to talk about his own grief, as well. (p. 107)

Rob calls his father's hands "complicated hands" because they did so many different kinds of things. Although they were the same hands that put medicine on Rob's legs and held him when he cried, they were also the hands that shot the tiger and who hit him on the day of his mother's funeral. (p. 114) Students may recognize that most parents have conflicting responsibilities of dealing with their own thoughts and feelings as human beings as well as trying to protect and care for their own children. As in the case of Rob's father, it was hard for him to deal with the loss of his wife, but he also had to help Rob deal with the loss of his mother.

On the first night that he spends time with Sistine, he feels happiness for the first time: "Rob remembered the name of the feeling that was pushing up inside of him, filling him full to overflowing. It was happiness." (p. 52) He didn't recognize it at first because it had been so long since he had felt that way. At the end of the book, he has allowed his sadness to surface, so he actually had room in his heart to feel happiness. On the last pages, he is waking up from a hopeful dream where he is sharing beautiful experiences with Sistine and smiling. He may define happiness as sharing one's feelings with a good friend and appreciating the beautiful things in life together.

Once the tiger was released, he had to be killed to protect the children or anyone else that was in the vicinity. Unlike the earlier incident when Rob recalls his father killing a bird just because he could, Rob's father kills the tiger in his desire to protect his son. Practically speaking, the police, or local animal control should have been called to protect the life of the tiger. This incident of killing the tiger is difficult to understand, because throughout the book the tiger seems to represent the caged up feelings of Sistine and Rob. When they finally release the tiger, readers may expect the tiger to run away with Sistine saying , "That was the right thing to do." (p.105) But when they release him, Rob remembers Willie May's green parakeet. Just as releasing the tiger has consequences, so does allowing your anger and sadness to finally surface after being bottled up. In this way, the tiger had to be killed so that Rob and Sistine could fully come to grips with their feelings. Rob's father needed to be a part of this because he was the person who instructed Rob to keep his feelings bottled up on the day of his mother's funeral.

Symbols are objects or actions that recur many times in a book. and they have a deeper meaning in the story. How is this object more than what it is? Why is it significant? What does it mean to a particular character? What is the author trying to tell us through this object?

What do these symbols represent in The Tiger Rising?

A literary device where the author repeats the same sound at the beginning of several words. An example from this novel is: “. . .grousing, grouching, grumbling, griping about something or other."
Try to write your own.

The author gives the readers clues so that they are able to predict what might occur later in the novel. Think about how following statement  an example of foreshadowing: "And then, finally, he smiled. He smiled because he knew something Mr. Phelmer did not know. He knew that his legs would never clear up. He was free."

Sistine was named for the Sistine Chapel 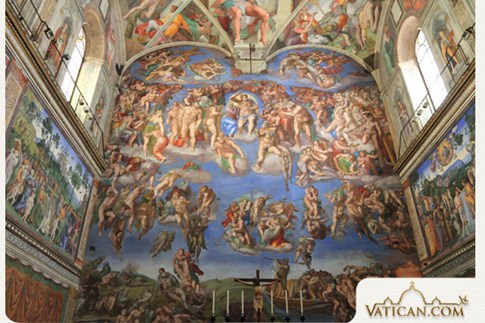 It was a mammoth task for Michelangelo but is now one of the world's great treasures. Read more here.

Other books by Kate DiCamillo